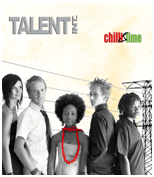 Chilli ‘n Lime is a dynamic young jazz outfit that has recently started making waves on the local music scene. This innovative collaboration ofJohannesburg’s finest talent draws on a fusion of styles including Latino, African favourites, funk and traditional jazz. Since their inception in late 2006, Chilli ‘n Lime has performed alongside South African artists, including Mango Groove and Judith Sephuma. These musicians in their individual capacities have also performed world-wide with well known artists such as Sibongile Khumalo, Themba Mkize, and Lauren Hill. They have representedSouth Africa on a number of cultural awards and have performed at Jazz Festivals including New Orleans, USA in 2005. They have also performed at the Elton John Charity Ball in 2005, Miss South Africa in 2005, and the South African Music Awards 2007.

Chilli n Lime have set the tone for numerous events including:

Chilli n Lime features Lindiwe Maxolo on vocals, Roger Mthimkhulu on acoustic bass, Nduduzo Makhathini on keys, Ayanda Sikade on drums and Ayodele Solanke on Saxophone.  Lindiwe Maxolo completed hers honours in Jazz Music with distinction at the University of Cape Town in 2005. During her studies in 2004, Lindiwe was chosen to perform with Cape Townrenowned pianist Mark Franschman in Athens, Greece as part of the Olympic festivities, where she graced the stage with the great Ryta Mali and Kadja Min. Since relocating to Johannesburg in 2005, Lindiwe has collaborated with well-known pianist Andile Yenana who introduced Lindiwe to the Johannesburg jazz scene. She has since collaborated with internationally celebrated artists Themba Mkhize and Sibongile Ngoma on their projects Soul ‘n Turf. In 2006, Lindiwe was invited to participate in a cultural exchange by hosted by the New Orleans South African Connection Inc, to perform at their exclusive dedication towards the aid of Hurricane victims and the rebuilding of New Orleans- America’s great city of music and culture. The event was hosted in New Orleans as well as Dallas, Texas.In 2007, Lindiwe was spotted by Urban Brew Producers who recruited her to sing in the widely popular TV game show ‘Lilizela Mlilizeli’ hosted by Rudeboy Paul Mnifi from YFM radio. Lindiwe was subsequently contracted for 5 months and the popularized show was broadcast on SABC2. Lindiwe presently continues performing with the likes of Vusi Khumalo and Sibongile Ngoma, one of SA’s renowned opera singers.   Roger Mthimkhulu, Ayodele Solanke, Ayanda Sikade and Nduduzo are accomplished, versatile musicians who have graced the stages of popular and well known Festivals around the world, including the Cape Town International Jazz Festival 2008 and the well-renowned Joy of Jazz Festival sponsored by Standard Bank. They have also collaborated with many artists such as Themba Mkhize, Sibongile Khumalo, Zimology, Hugh Masekhela, Khunle, Lesego, Vusi Khumalo and Judith Siphuma, just to mention a few.