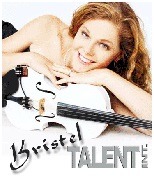 Kristel is an accomplished musician – having undergone extensive formal training from age 6, which culminated in a BMus degree from Wits (1999), where she majored in performance. She also received numerous awards and prizes during her studies. Besides being a highly experienced violinist, she is also proficient in piano, flute and singing.

One of the highlights of her performance career include performing in the Subaru car advert in 2007, playing the lead violin role in the Barnyard Theatre production “Beethoven Rocks Again” (2003/4), the “Harvest Moon” production which recently ran at the Willowbridge Barnyard (2006) and “Rock Me Amadeus” at the Menlyn Barnyard. She has made guest appearances on e-TV’s “Backstage” (2005), with Watershed on KykNet (2000) and recently appeared as a violinist on the Egoli set (2006/7). She also  has extensive experience in performing for large corporate events.  Kristel is proficient playing in different musical genres, from classical to jazz, Celtic to rock and funky dance to local African styles.  Music combinations can include; solo violin, violin and backtracks, violin and piano, violin and guitar and two violins.