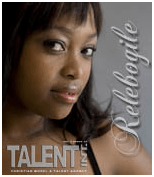 Relebogile has been entertaining audiences since she was five years old. During her school years, Relebogile won many awards for her exceptional talents as a singer and actress.In her matric year, she was cast as a principle role in the stage production Fame- The Musical- Playing the role of ‘Mabel’, Relebogile was nominated for a Naledi Award (2004) for BEST NEWCOMER FEMALE and BEST FEMALE in a Musical. Fame gave Relebogile the opportunity of performing at the opening of the 46664 Concert at the Cape Town International Convention Centre and, again at the Dinner Banquet, performing alongside Mara Louw.Towards the end of 2004, Relebogile’s bubbly personality led her to present the show BACKCHAT on the CrazE show for E-TV. Since then, Relebogile has exercised her great acting ability on shows such as Home Affairs, Zone 14, Generations and an Afrikaans Sketch Comedy Kompleks, as well as German film, Traum Hotel.Relebogile performed in the Afrikaans musical Imbumba/Samesyn, which has performed at the Aardklop festival in Potchefstroom in 2004 and in 2005 at the KKNK in Oudtshoorn and Innibos in Nelspruit. She alsostarred as “Pinky- the Shebeen Queen” in the musical ‘SOWETO STORY’ which was at the Johannesburg CIVIC THEATRERelebogile was most recently seen presenting GOSPEL GROOVES every Sunday morning on ETV- A show which was proud of reaching over one million viewers every week. She also presented the SABC 2 Christmas Special, The 12 Days of Christmas.Relebogile has become known for her EXTREME versatility in the SA Entertainment Industry. If she’s not entertaining through singing, acting or presenting, she’s writing articles for TEENZONE MAGAZINE, Emceeing corporate events and working in production for television.Towards the end of last year, she collaborated with gospel artist David Dee on the song, “Change”, which they performed on many shows and Christmas specials. She also created the band “The Wine Collection”, for which she writes, arranges and directs the music for. She can be seen performing with her band at Blues Room in Sandton and various corporate events, where she has performed alongside artists such as Abigail Khubeka, Mara Louw and Kunle Ayo. Currently she can be seen playing Mpumi on ETV’s RhythmCity and emceeing and singing at corporate events.