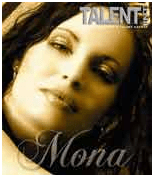 Having performed solo works, eisteddfords and concerts from a young age and being invited to perform with the Youth Orchestra, Mona has had a passion for music for as long as she can remember.

Turning passion into reality, Mona studied opera at Tswane University of Technology. While still studying Mona fulfilled her childhood dream of performing in the Lloyd Webber musical “Phantom of the Opera”. Being cast as Christine Daae in this famous musical lead to her professional debut staged at the Arts Cape theatre in Cape Town and the State Theatre in Pretoria.

Subsequently, together with The Really Usefull Theatre Company, she spent four years touring Shanghai, Korea, Taiwan, Hong Kong and Singapore performing “Phantom of the Opera”. Returning to South Africa she recorded her first, soon to be released, album entitled ‘Mona pÓpera Diva’, which includes most of her favourite pieces, with the wish that whoever listens will be touched by the magic to be discovered in the music and lyrics and to gain the same enjoyment as she has.

Wanting to express the inexpressible in music, to sing songs that give hope to saddened hearts, to uplift spirits, encourage and comfort people and bring them endless joy, Mona is looking forward to launching her solo career with recordings, live shows and concerts.